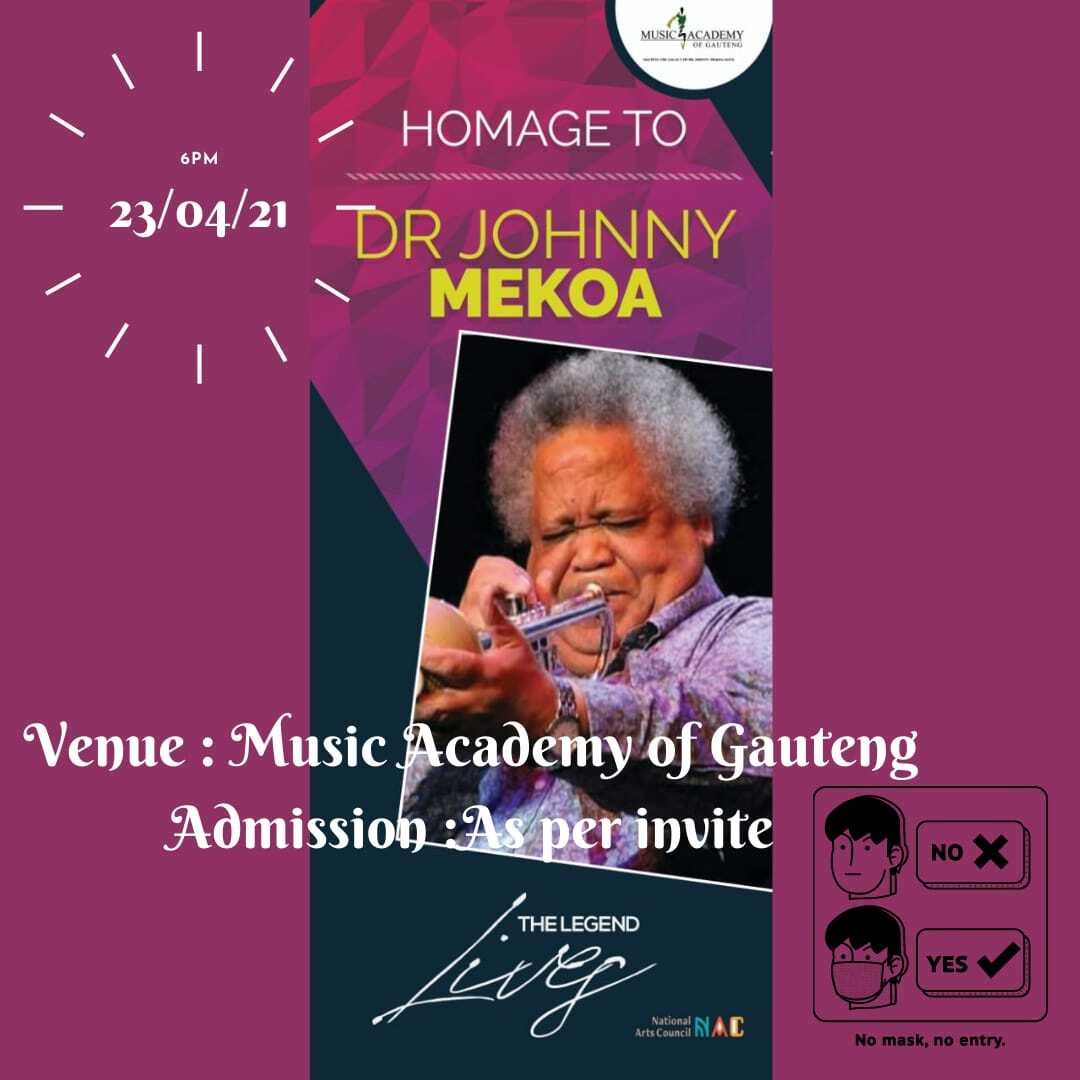 It is no coincidence that MAG came into being in 1994, the year that
South Africa held its first ever fully representative elections and brought a
democratically elected government to power. Since then MAG has been
housed in a disused electrical warehouse in Daveyton, a township in
Ekurhuleni, a vast urban sprawl east of Johannesburg. The premises are
run down and cramped - teachers do not even have their own cubicles, all
staff and administration are housed in a small communal office. Facilities
are basic, and instruments cannot be left overnight due to the high level
of crime in the vicinity. The original concept was to upgrade the
premises, but during 1998 it became apparent that there was little hope
of getting the go-ahead from the local authority to do this. The future of
MAG at this site became insecure and the progress of the school was held
up by its inability to plan ahead with any certainty.

The director of MAG, Johnny Mekoa, and the staff, workshopped ideas on
the future of MAG together, and reached consensus on the need to
purchase property not far from its present premises which would belong
to MAG. The board enthusiastically supported this proposal, and this has
become the most pressing goal of MAG - to move to safe premises, where
there will be facilities for staff, tutors and students and where a music
library can be housed and musical instruments and computer equipment
safely stored.

To date a plot of land at Cloverdene near Daveyton has been acquired
and zoned as ‘A Place of Music Instruction and Its Allied Industries’ by the
local government, with the approval of the South African Surveyor-
General. A comprehensive plan has been professionally drawn up by an
architect and approved by local government. The plan caters for three
phases of building, as funds become available. The plan, in booklet form,
is appended.

The main purpose of MAG is to offer both full-time and part-time music
education which can then provide a stepping stone for young people into
tertiary education or the music industry. MAG linked itself to the
Associated Board of Royal Schools of Music, and in its first year of
operation attained a 95% pass rate in the RSM’s external examinations.
The context in which MAG has positioned itself is that of providing music
school access at less than nominal cost for disadvantaged young people.
Street children have been welcomed into MAG from its inception and
many have had their lives revolutionized as a result. MAG consciously
presents a career in music as an alternative to loitering on the streets and
getting absorbed into gangsterism. Significantly, the first MAG 14 - 16
piece Youth Orchestra/ Big Band, came into being in 1994. To date this
orchestra has played a crucial role in publicizing MAG, with audiences in
Gauteng, wider South Africa, Sweden, Germany, the United Kingdom,
Holland and the USA, moved and inspired by the performance skills of the
orchestra. The British Broadcasting Corporation has also made and
screened a 10 - minute video featuring the MAG youth orchestra, and in
July 2002 the MAG Youth Orchestra attended - by invitation - the world
renowned Wigan Jazz Festival near Manchester, U.K.
THE PASSION THAT DRIVES MAG

South Africa is a country with huge potential, yet its youth are
beleaguered by a society rife with crime, poverty and the emergence of
an HIV/Aids pandemic. If we trace the history of the founder, and
present director of MAG, we find that his life experience and vision equip
him to cut right to the core of these issues. Johnny has for many years
been a nationally acclaimed trumpeter and jazz musician. He grew up in
the apartheid era in South Africa, seeing communities around him forcibly
removed to bleak townships, with their whole culture of music being
destroyed in the process. He lived in a family system where music was all
around him, where the hopes and dreams of an oppressed people were
consciously kept alive by music. When his family moved to Daveyton in
1965 gangsterism was rife and many restrictions were imposed on
musicians of colour. Johnny’s response to this social situation was to start
a jazz group called the Jazz Ministers, which became the pride of
Daveyton and the adjoining city, Benoni. Musicians taught music from
each others’ homes in Daveyton. Johnny experienced harassment from
state security services, e.g no passport given to tour internationally in
1972. In 1976 he was given a conditional South African passport to tour
the USA with his band. In spite of expectations that Johnny would stay
out of South Africa in exile, he chose to come back to South Africa.
Seeing how music united and inspired people, Johnny developed an
unshakeable belief that comes straight from his heart, that music has the
power to have an enormously positive impact on a community and on a
nation.

So it was that within Johnny Mekoa there was a growing realization that
he had to contribute to music education in South Africa. In 1986 at the
age of 40 he resigned from his day job as an optical dispenser, and went
to teach at the Fuba Academy in Newtown, Johannesburg. In 1987 he
went to the University of Natal to study Jazz with Darius Brubeck son of
Dave Brubeck, as one of his lecturers. In 1990 Johnny obtained a
Bachelor of Music in Jazz Studies degree, the first black South African to
do so.

While at university, Johnny played in the university band, The Jazzanians,
which in January 1988 undertook a two week tour of the USA and
attended the National (later to become the International) Association of
Jazz Educators in Detroit, Michigan. He attended master classes with Dr
Billy Taylor while in the USA and was featured on Dr Taylor’s Sunday
Morning TV show Out of Africa. Johnny was also given a special citation
for Outstanding Musicianship.

In 1990 Johnny was interviewed for a Fullbright scholarship, which he was
duly awarded. During the interview he made an impassioned plea for
understanding the role of music in society. While on the Fullbright
scholarship Johnny studied for and obtained a Master of Music degree,
with emphasis on pedagogy, at Indiana University in the USA from August
1991 to December 1992. Pedagogical training, performance experience,
a network in the South African and international music worlds were
combined in Johnny with a burning desire to make a difference for
disadvantaged youth through music education. In the years since 1994,
MAG and Johnny Mekoa have built up priceless credibility with local and
far flung music educators, and have won acclaim for their programmes
and performances from government bodies and from both the former
president of South Africa, Mr. Nelson Mandela and the current president,
Mr. Thabo Mbeki.

In January 1997, Johnny Mekoa took the student band to the
International Association of Jazz Educators in Chicago and to Indiana
University where they were very warmly received. In April 1997 MAG
participated very successfully in the second of the annual “Youth in Jazz”
series at the Market Theatre in Johannesburg. MAG continues to take
part in the South African Jazz Festival circuit.
The students at MAG who play in the Big Band, some of whom were
former street children, move the hearts of all who hear them, and
perhaps even more importantly, attest to the benefits that flow not only
from learning music, but also learning to interact in a team, to dress for
the occasion, to deal with success and failure, to be generous spirited
about the achievements of their peers, to have the self confidence
required to improvise, to be punctual and to sacrifice personal wishes to
the group’s needs.

MAG provides a stepping stone into tertiary education and/or the music
industry. Former students are now studying at the University of Natal and
the Pretoria Technikon. Others are playing a significant role in the SA
music industry. Staff, student tutors and sometimes students too, play in
a second jazz band which is part of MAG - Four Forty by name. The band
leader is Mvuzo Dimba, a full time teacher at MAG and an emerging
composer of jazz melodies. Four Forty have cut their first CD with Sony
records, and it is available on the commercial market.
At a MAG teambuilding session in 1999, when the staff were reflecting on
the question “What does MAG exist for?” Johnny Mekoa spontaneously
made the following statement, now known as JOHNNY MEKOA’S CREDO.

This serves as MAG’s vision and mission:
* To anchor MAG’s position in the world of education and the arts,
the music industry and the total economy. I am proud of my team
at MAG and committed to developing youth. My vision is for MAG
to become a world renowned institution.
* For the MAG team members to grow in professional skills and
capacity, and to become top performers and educators.
* To inspire all at MAG to achieve positive results, so that the whole
nation - from the president down - will be proud of us.

Chairperson of the Board